The City of Arts and Sciences: innovation, culture and design 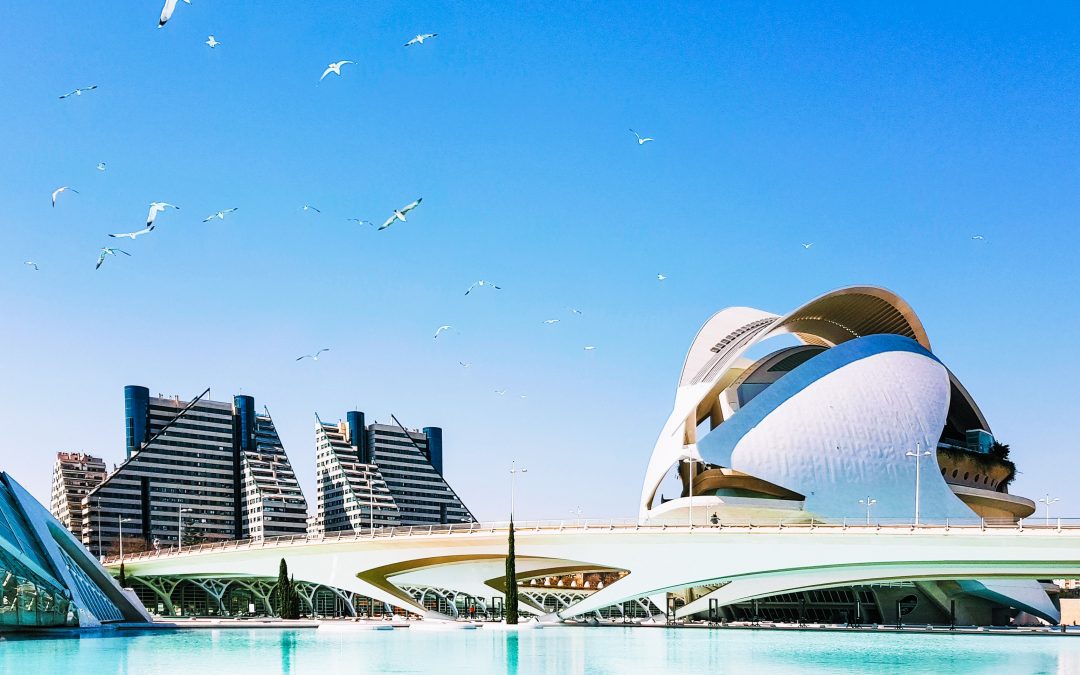 This past 16th April was the 24th anniversary of the inauguration of the City of Arts and Sciences in Valencia. At Sonneil, we would like to take this opportunity to tell you more about one of the most popular and exciting destinations on the Mediterranean coast.

The City of Arts and Sciences: history and design

In 1989, the scientist Antonio Ten Ros began preparing a proposal for a future City of Science and Technology for Valencia. In 1990, the Generalitat officially commissioned him to draw up a general preliminary project that he would manage together with the University of Valencia and 56 other professionals including scientists, museologists, designers…

After Ten Ros abandoned the project, work began in 1994 under the direction of the renowned architect Santiago Calatrava. Although initially it was to be a space dedicated to science and innovation, art was eventually added to form what we now know as the City of Arts and Sciences, incorporating an opera house and an oceanographic park to the original idea.

Almost ten years after the start of the project, L’Hemisfèric was finally inaugurated in 1998. This was followed by the Príncipe Felipe Science Museum eleven months later. L’Oceanogràfic, the largest aquarium in Europe, opened in 2003, and in 2005 it was the turn of the Palacio de las Artes Reina Sofía, which was to become Valencia’s opera house.

The City of Arts and Sciences: what to see

The different buildings at the City of Arts and Sciences make up a complex that quickly became a must-see destination in the city of Valencia, attracting tourists and visitors and enhancing the value of the area where it is located.

L’Oceanografic is the largest aquarium in Europe, designed as a tribute to the sea and water, the element that makes Valencia such a special city, on the shores of the Mediterranean.

Its different aquariums, divided into 9 areas, recreate the most important oceanic and marine ecosystems on the planet, with more than 500 fauna species. A leading scientific, educational and recreational centre that seeks to promote the conservation of the seas and raise awareness of the need to care for them.

The Palau de les Arts Reina Sofía is one of the most impressive and magnificent buildings in the City of Arts and Sciences. It covers an area of more than 40,000 m2 and is 75 metres high, including open-air areas, walkways, vegetation, panoramic lifts…

The interior is equally impressive, with four different areas dedicated to operas, musicals, theatre and dance performances. The Palau has also incorporated the latest technological advances to be able to host works of the highest quality and in the best conditions.

The first opera to ever be performed at the Palau de les Arts Reina Sofía was Beethoven’s Fidelio, on 25th October 2006.

The building of the Museu de les Ciències is particularly known for its whale skeleton shape. But this is not the only thing that makes it unique. This magnificent museum stands out for its interactive nature, illustrated by its motto “Forbidden not to touch”. The museum is ideal for younger visitors in particular, who can learn about the principles of science by experiencing them first-hand.

Covering an area of 40,000 m², it is spread over three floors and hosts both temporary and permanent exhibitions, as well as workshops and educational activities. Chemistry, robotics, nature, technology, physics, biology… The museum is also a popular venue for congresses and organises exchange programmes with other leading science centres around the world.

The first building to open in the City of Arts and Sciences offers incredible shows in its 3D digital cinema, featuring a huge 900-metre screen that totally immerses the audience in the images. It is the largest cinema in Spain, with seating for more than 300 people!

Most of the films shown here are documentaries, and one children’s film a day for the younger ones. Like most of Santiago Calatrava’s buildings, the Hemisfèric also has a unique shape, in this case the shape of an eye, which is reflected in the 24,000 m2 lake next to it. This eye symbolises the wisdom, the gaze and the observation of the world that visitors discover.

Umbracle provides the City of Arts and Sciences with a space to enjoy the open air. This huge 17,000 m2 garden is filled with typical Mediterranean plants and vegetation and contemporary style sculptures. Take a stroll in spring surrounded by art and rosemary, bougainvillea, palm trees, lavender… it’s wonderful.

As for the sculptures, this open-air art gallery is known as El Paseo de las Esculturas, with works by Miquel Navarro, Francesc Abad and Yoko Ono, among others. You can also spend your summer afternoons and evenings at Mya, the Umbracle terrace/bar, one of the most elegant leisure spaces in Valencia.

Now that you know the City of Arts and Sciences a little better, do you want to know more about Valencia? In this post you can check out a quick guide on what to see in Valencia, the capital of the Mediterranean light.

At Sonneil, we offer properties on the Mediterranean coast so that you can start a new chapter in a place as special as Valencia. Let us show you 👇

SEE PROPERTIES ON THE COAST