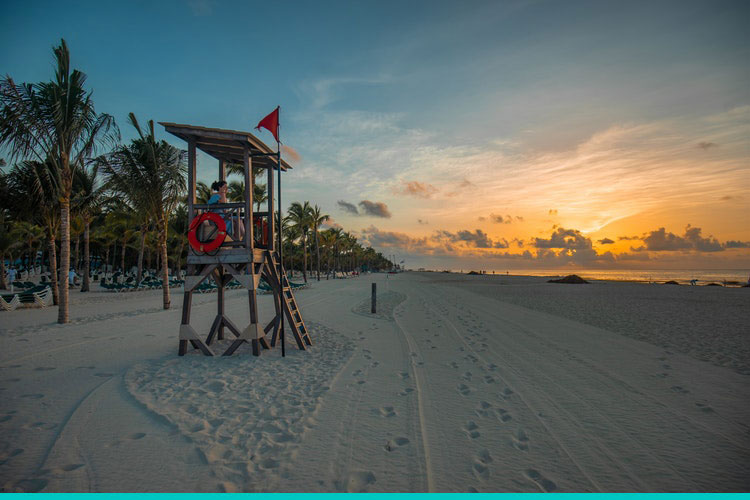 The Costa Blanca is located in the province of Alicante south of Valencia on the Mediterranean coast.

With an average temperature of 20°C and 300 days of sunshine a year, the Costa Blanca is one of the most visited seaside destinations in Spain and also attracts many foreigners to come and settle here. The majority of whom are drawn by the 235 km of coastline that Costa Blanca has to offer.

Below are just some of the best beaches on the Costa Blanca, according to Sonneil.

Sand and rocks mix here to create a quiet beach of turquoise and crystalline waters, with a calm sea, separated from the rest of Alicante’s beaches. It is the perfect place to spend the day, enjoying Alicante’s clement weather. Like most popular beaches, La Caleta is equipped with umbrellas and deck chairs, scooters, and other rental services as well as kiosks offering food and refreshments.

Another of our favourite Costa Blanca beaches can also be found near Alicante. Tabarca Island, besides being the only inhabited island in the Valencian community is also a nature reserve/paradise for tourists. Accessible by boat from Alicante, Santa Pola, and Benidorm, its main beach, known as Tanarca or Levanteis, is one of the best in the Alicante area. You will find all types of services for your day of sun and sand, including restaurants and rental scooters. The beach itself is a mix of golden sand and pebble, with a seabed that is crystal clear, inviting swimmers to discover the flora and fauna under the water.

The Granadella in Jávea

Surrounded by nature, Granadella cove in Jávea, is considered one of the precious coastal jewels of the city. At only 200 meters long and just over 20 meters wide, this small gravel beach has had a blue flag for nearly 30 years, making it a favourite for scuba diving enthusiasts.

One of the most beautiful cities of the Costa Blanca, and also one of the most visited in the summer months is Calpe. Brooded over by the spectacular Peñón de Ifach – a massive limestone outcrop jutting out of the sea – it has a total of 11 beaches and coves. Among the most charming of which is Cantal Roig. One of the smaller beaches, it has fewer tourists and is located right at the foot of Peñón near the fishing port. Its calm, perfectly transparent waters are perfect for observing the world beneath the waves. There are some rocky areas in the water, so if you like to explore, we recommend you wear appropriate footwear.

Unlike most of the beaches in our list which are characterised, at least in part, by areas of gravel or pebbles, Carabassi in the city of Elche stands out for its large expanse of fine golden sand as well as the system of dunes and pine forests that surround it. Carabassi beach also turns heads thanks to its dedicated nudist section. So if you want to be completely surrounded by nature, head to Carabassi!