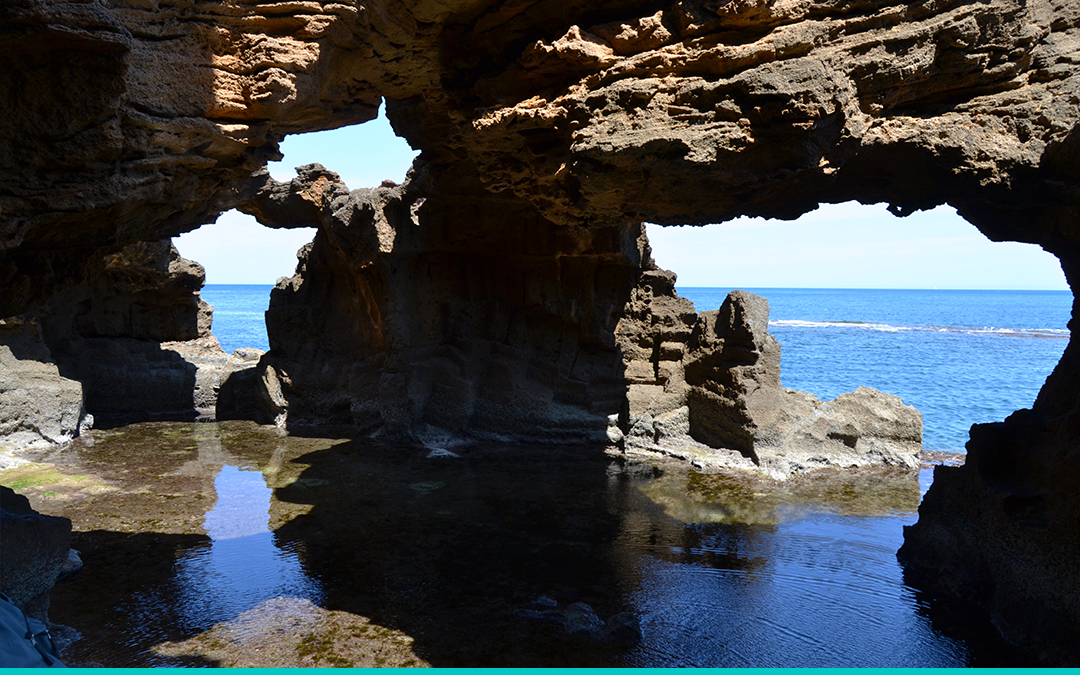 On the Costa Blanca Coastline, between Denia and Javea is the mythical Cova Tallada. A huge cave dug out of Cape San Antonio that for hundreds of years served as a quarry for the stone used to construct historic buildings such as Denia Castle. Nowadays it forms part of the Cabo de San Antonio Nature Park and offers a truly amazing experience for the adventurous souls who dare to enter the cavern.

The partly natural, partly man-made cave was first excavated during the Muslim era and contains evidence of activity dating back to the 12th century. While it’s no longer a working quarry it is rumoured to have served as a secret hideaway and supply depot for German submarines during the Second World War.

The cave is reached from Javea via the Cape lighthouse route or from Denia, thanks to a 750 metre path that runs along the Mediterranean by a small cliff.

The cave itself is about 75 meters wide and about 15 meters high, with five large “doors” through which the sea and light can enter. The space is large enough to allow for the entrance of canoes, which makes for another very interesting way to take in the experience. The area outside the cave is suitable for swimming thanks to a rocky projection that acts as a breakwater, meaning the surrounding sea is usually calm and ideal for snorkelling.

Inside, the cave has several large passages that you will need a torchlight to explore due to their darkness. Among the interesting features to be seen inside are the marks on the walls made by centuries of stonecutters and, at the entrance of one of the cavernous ‘rooms’, an inscription on the rock that indicates that King Philip II was there in 1599.

It should be noted that due to the huge popularity of the Cova Tallada, especially in summer, the number of visitors allowed to enter at a given time will be limited in order to alleviate the ecological burden on the site. Numbers will be limited to 482 people per day, with no more than 71 people allowed in the cave at the same time. It will also be necessary to make a reservation – allotting a specific day and time – to visit the cave.

Those wishing to explore the cave should bring water and food with them as well as suitable clothing and footwear, a flashlight and a camera with plenty of storage capacity: you might need it to capture the views and the amazing local flora along the way.