The 5 most beautiful towns on the coast of Castellón 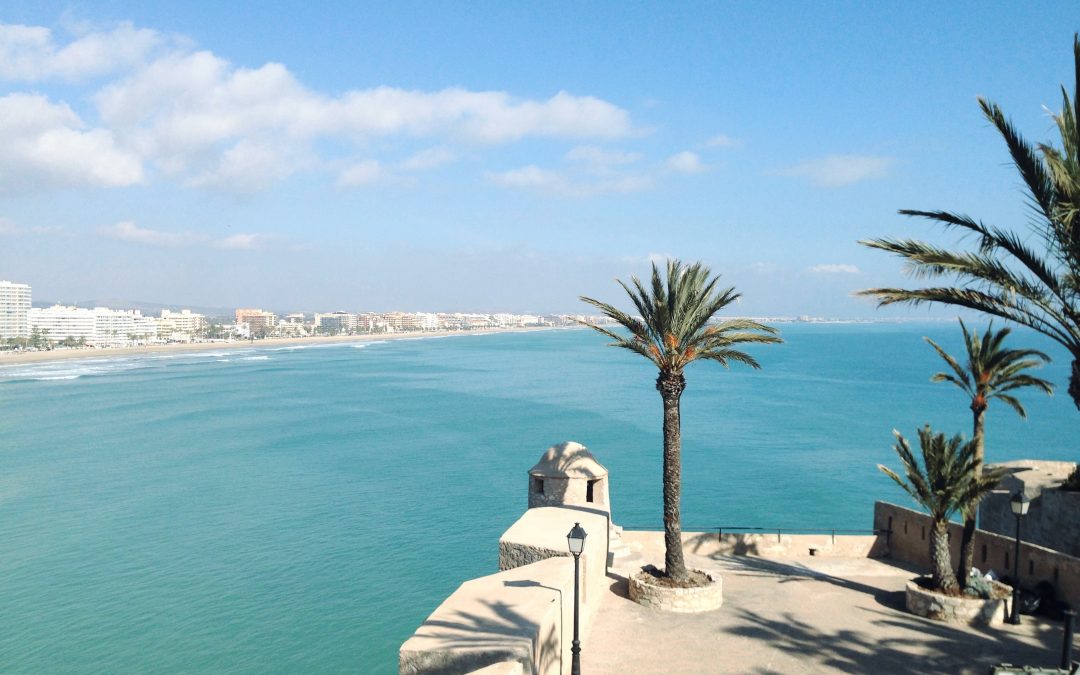 The coast of the Valencian Community is one of the favourite tourist destinations for Spaniards and foreigners alike, and its fine golden sandy beaches are as desirable as its climate -over 300 days of sunshine a year- and its delicious gastronomy.

The Costa de Azahar, name given to the coast of Castellón, is about one hundred and twenty kilometres long, bordering Tarragona to the north and Valencia to the south. Its name comes from the orange blossom, as it is the most important crop in the region. Its beaches are inviting, quiet, most of them very close to town centres, and of fine sand, which turns them into very popular and sought-after destinations.

Castellón province is perhaps the least known, which is why in this post we are going to list the most beautiful towns on the coast of Castellón to spend your holidays, a short break or a weekend.

Peñíscola is undoubtedly one of the most beautiful towns in Castellón and there are many reasons for this, as it is rich in history and geology. It is crowned by the castle of Pope Benedict XIII, also known as the castle of Pope Luna, a 14th century fortress built on the remains of an Arab citadel, on an impressive rock that rises sixty metres above the sea.

Surrounding the castle is the old town of Peñíscola, which forms a nice contrast with the newer, more touristy part. It has beautiful coves and very wide and clean beaches, with all kinds of services and facilities. Another of Peñíscola’s great advantages is that it is located in the coastal mountain range of Irta, one of the most unspoilt on the coast of the Valencian Community. The Irta mountain range rises up between cliffs and coves, and is covered with abrupt and abundant vegetation. It has an altitude of five hundred and seventy-two metres above the sea level, which allows for fabulous views of the entire coastline.

Benicarló is surrounded by irrigated orchards and fabulous beaches of fine sand, which are very quiet. It is a town open to the sea, with modern facilities and services, but which also conserves its traditional seafaring charm. However, Benicarló is much more than just sun and beach, it is also culture, as it has an important cultural, artistic and architectural heritage.

The most notable points of interest are the church of San Bartolomé, the Mucbe museum, the hermitage of Cristo del Mar, the old prison and the hermitage of San Gregorio. Its natural surroundings are also very charming, and visitors can learn about the history of the Iberian peoples through the famous settlement of Puig de la Nao or the settlement of Tossa.

It is a town with ten kilometres of coastline, very quiet and family-oriented, located in the natural and protected environment of the Sierra de Irta. Its large, good quality beaches are the treasure of this municipality, as well as its various unspoilt coves separated from each other by large rock formations. Las Fuentes beach is worth mentioning, as it has freshwater springs that emerge on the beach itself and which are of great ecological value. Flat areas mixed with mountainous areas offer an impressive landscape full of contrasts that make this town a great holiday destination.

For those who prefer a more beachy and touristy atmosphere, the ideal place to spend your holidays in a town on the coast of Castellón is Benicassim. This municipality has become one of the most popular with tourists, as it offers wide beaches with all the necessary services, as well as a cultural heritage of great historical value, such as its castle or the tower of San Vicente. Furthermore, Benicassim is famous for the wide range of services it offers in all areas of leisure, such as the famous Benicassim festival.

Oropesa del Mar is a town of great beauty, very close to the Oropesa mountain range, and stands out for its extensive orange groves set against the sea. It has several beaches and small natural coves, very suitable for holidays. A visit to its beautiful old quarter, the unspoilt beach of La Renegà -full of native vegetation and rocks eroded by the sea-, the impressive viewpoint and its emblematic lighthouse are not to be missed.

If you want to enjoy these wonderful towns on the coast of Castellón, at Sonneil we have a wonderful residential development, the Cormorán complex and the Ninfa complex, from which you can enjoy the beauty and tranquillity of the Costa de Azahar.